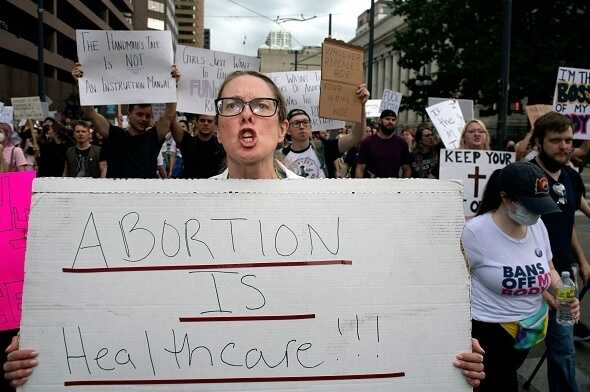 Historically, doctors have played a big role in abortion’s legality. Back in the 1860s, physicians with the newly-formed American Medical Association worked to outlaw abortion in the U.S.

A century later, they were doing the opposite.

In the 1950s and 1960s, when states were liberalizing abortion laws, “the charge for that actually came from doctors who said, ‘This is insane, we can’t practice medicine, we can’t exercise our medical judgment if you’re telling us that this is off the table,’ ” explains Melissa Murray, law professor at New York University.

The Supreme Court ruled in doctors’ favor in Roe v. Wade in 1973. The majority opinion spoke of “the right of a woman in consultation with her physician to choose an abortion,” Murray says.

Yet doctors and patients are all but absent from the latest Supreme Court majority opinion on abortion in Dobbs v. Jackson Women’s Health Organization. In fact, in the opinion, Justice Samuel Alito uses the derogatory term “abortionist” instead of physician or doctor or obstetrician-gynecologist.

Legal experts say that signals a major shift in how the court views abortion, and creates a perilous new legal reality for physicians. In states where abortion is restricted, health care providers may be in the position of counseling patients who want an abortion, including those facing pregnancy complications, in a legal context that treats them as potential criminals.

“Alito’s framing is that abortion is and was a crime – that’s the language he uses,” says Mary Ziegler, a law professor at the University of California, Davis. There’s no dispute, she says, that “the result of a decision overruling Roe in the short term is going to be the criminalization of doctors.”

Doctors were at the heart of the court’s first landmark ruling on abortion, Roe v. Wade.

“The original Roe decision – it was very, very doctor-centered – extremely so,” says Ziegler, who has written extensively on the legal history of abortion. “At its inception, this was a right that was very much about health care and about the doctor-patient relationship.”

Roe and the abortion decisions that came after it like Planned Parenthood v. Casey, “had the framework that abortion is some sort of individual right, but it’s also health care,” explains Carmel Shachar, executive director of the Petrie-Flom Center for Health Law Policy, Biotechnology, and Bioethics at Harvard Law School.

The court essentially told states: “You can put restrictions on abortion services and on provider qualifications as you do for other types of health care, and as long as they are not so onerous that we

Should really the Supreme Courtroom overturn Roe v. Wade, the modify would pose a profound threat to maternal well being in the U.S., specialists explained.

A leaked draft view posted Monday by Politico indicates that the court docket is probable to reverse the seminal ruling that enshrined the constitutional appropriate to abortion nearly 50 several years back. The court docket confirmed the authenticity of the draft the ultimate final decision isn’t envisioned until finally late June or early July.

If Roe is overturned, virtually two dozen states are probable to ban abortions or seriously limit entry. 13 have “cause rules” that would ban abortion practically quickly, in accordance to an NBC News assessment of facts from the Middle for Reproductive Legal rights.

Investigation implies the bans and limitations would have manifold outcomes on maternal overall health. For one particular, if more pregnant people cannot get the abortions they look for, they’d shoulder the hazard of the U.S.’s somewhat higher — and rising — price of demise from pregnancy-linked brings about, which is significantly elevated between folks of colour.

“There are likely to be ladies that will die from pregnancy simply because of this conclusion, interval,” reported Dr. Amy Addante, an OB-GYN in Illinois and a fellow with Medical professionals for Reproductive Wellbeing.

In addition, pregnant individuals would experience the risk of prosecution for trying to get to stop pregnancies in states where by abortion is banned, and investigate has shown that unwelcome pregnancies have many hazardous extended-phrase implications for moms, which includes a higher chance of money hardship and a extreme toll on psychological overall health.

The U.S. has the optimum maternal mortality rate of any created state. In full, about 700 women of all ages die just about every year of pregnancy-linked difficulties in the U.S., and about 3 in 5 of those deaths are preventable, in accordance to the Facilities for Ailment Management and Avoidance.

“One particular of the factors that I stress about the most is that we are likely to see an improve in maternal deaths in this country” if Roe is overturned, explained Lauren Ralph, an epidemiologist at the College of California, San Francisco.

The U.S. maternal mortality charge in 2020 was 23.8 deaths for every 100,000 reside births — the maximum it had been due to the fact right before Roe was overturned, in accordance to the Commonwealth Fund, which promotes greater health and fitness treatment for underserved communities. The fee was far greater between Black persons: 55.3 deaths, which is practically 3 periods the price for white persons.

A rise in maternal deaths, as a result, would possible “be concentrated amongst folks who are residing underneath the federal poverty line, folks of color,” Ralph explained.

The U.S. maternal mortality price additional than doubled from 1987 to 2017, CDC facts display. By contrast, maternal mortality in large-revenue nations diminished slightly every year on ordinary above about the same period, in accordance to a